Cricket, rugby league and tennis are not the only sports introducing shorter forms of their games to entice new audiences, with bowls also keen to get in on the action with the newly introduced Jack Attack.

We at Buderim Bowls Club are trying to attract new members by allowing social people to play our sport at a time that suits them, such as week nights.

A well lit facility like this here at Buderim is ideal because you can play it any time.

It is an Australia-wide program, and clubs across Australia have introduced it including Buderim Bowls Club on the Sunshine Coast.

It is a short and fast format, so it suits the age group that we are trying to target, which is people who are working and have families.”

The game consists of two sets of five ends and usually takes a little over an hour to complete.

They can come after work and then play their games and still be home in time for family activities.

Buderim has a 6 to 8 week Jack Attack competition every Spring and Autumn on a Wednesday night starting at 6pm.

We serve pizza between games and the bar is always open with the cheapest drinks on the coast. 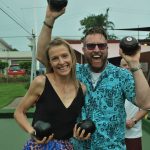 “Thanks Buderim Bowls Club for an awesome evening of fun and laughter. Your venue made the perfect exit for one of our dearly loved workmates retirement. Your facility made it easy to interact with each other in a fun environment while also allowing us to present gifts etc with everyone being able to view the presentation. I would highly recommend your service.”